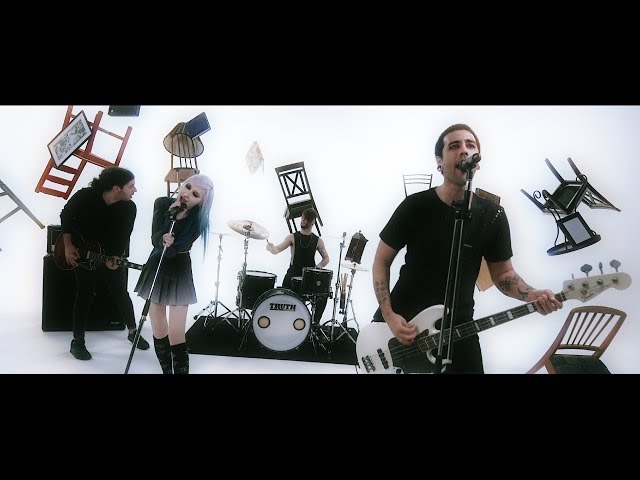 Artist Bio: Based in Toronto, Canada, The Ocean Cure offer a vast sound of post-hardcore and metalcore sensibilities, with a dash of prog and a sprinkle of pop. Since forming in 2014, members Pauline Taylor (Vocals), Casius Wray-Muto (Bass/Unclean-Vocals), Mike Di Monte (Guitar/Vocals), and Nicola Sudano (Drums/Programming) have been fine-tuning their sound and lyrical content. Stemming from the common theme of the ocean, The Ocean Cure draws comparisons to the calm before the storm and the symbolic impact of crashing waves.
After forming, the band unleashed their debut single “Take Cover” which featured Chris Cosentino, who also produced, engineered and mixed the single. The single amassed over 11,000 views on Youtube and guided them to begin vigorously touring throughout Eastern Canada. The band began sharing the stage with artists like I Set My Friends on Fire, Ice Nine Kills, Hawthorne Heights, Palisades, Secrets, Picturesque, and Oh Sleeper to name a few. In 2015, they were invited to perform at The Vans Warped Tour Toronto date, and continued playing festivals like Canadian Music Week, Indie Week, KOI Fest, and Montebello Rockfest. In 2016, the band launched their debut EP, Daydreamer, produced, mixed and mastered by Damian Birdsey. The 6-track record included singles, “Too Close For Comfort,” “I’ll Survive” and “Waiting For You” which has amassed over 14,000 views on YouTube thus far.
Following the release of Daydreamer, The Ocean Cure is back with a brand new EP, RE: Discover, set for release on June 14, 2019. The 5-track EP was produced and mixed by Sam Guiana, and is a reinvention of what The Ocean Cure is all about.
Off the forthcoming EP, the band launched, “Structures,” a song that represents the band as a whole both musically and lyrically. On the track, the band explored the incorporation of electronic elements to the sound with an undeniably catchy chorus. The EP confronts a variety of themes like anxiety, the fear of not being in control of oneself, being a caretaker of the planet, the ability to persevere against all odds, and moments of regeneration.
Fans can stay tuned for more announcements by heading over to their Facebook page now at: Facebook.com/TheOceanCure
Director Name: The Trenches Media
Director Website: http://www.thetrenchesmedia.com
Producer Name: Alex MacFarland

About the Video: Astrolab Studios