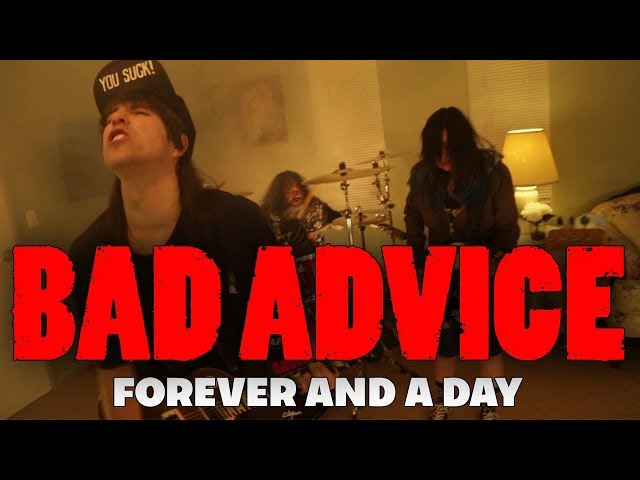 http://www.BlankTV.com – Bad Advice – “Forever and a Day” – Like this video? Come see thousands more at the Net’s largest, uncensored, completely d.i.y. music video site, BlankTV.com!
We’ve got News, Games, Contests and the stuff that we can’t show on YouTube!

Artist Bio: BAD ADVICE are a 3-piece skate punk band who formed in Bautzen, Germany and established themselves locally back in 2012 playing local shows before branching out into the surrounding cities performing to as many friends all the while gaining as many fans as possible. BAD ADVICE is the brainchild of songwriter/singer/guitarist, Sebastian Wende, whose passion in writing quick, fast-paced, upbeat punk rock tunes inspired him to seek out like-minded individuals to start a band influenced by the likes of; NOFX, Pennywise and Lagwagon.
In 2013 BAD ADVICE recorded their debut EP and then independently released it on CD & 12″ vinyl titled, ‘You Suck!’ in 2014.
After a handful of local shows, Wende decided to move the band to Leipzig, Germany, which resulted in two members choosing to be left behind. A few months later Wende recruited local musician and artist, Wank Sinatra on bass and the two began rehearsing and recording new material with a revolving door of local drummers.
In spring 2015 when BAD ADVICE had an opportunity to tour in Germany, Wank reached out to a mutual friend and contacted American veteran punk rock drummer, Gizz Lazlo, formerly of legendary punk rock bands; U.K. Subs, BadTown Boys, The Freeze and Dr. Know; as well as former lead vocalist of Dead Lazlo’s Place (from Los Angeles, CA, USA) and Camelboy (from Bremen, Germany, EU).
While originally contacted for advice on finding a drummer to tour Europe with them, a friendship blossomed between Wende and Gizz, resulting in Gizz offering his services to tour with the band. One month later Gizz was in Leipzig rehearsing, recording and filming a music video with his new bandmates.
After a short but sweet European tour the band’s music and stellar live performances left audiences wanting more. Effen Records along side 6122 Recordings released ‘Life Sentence’, a 5-song CD-EP in January 2016.
BAD ADVICE made their debut on US soil in March 2016. Their debut performance was in Sin City – Las Vegas, Nevada promoting their new CD with Glue Gun and The Midnight Staggers. Joining them on their North American promotional tour were bassists; Joey Rimicci (Jughead’s Revenge, Black Fag, Glue Gun, NOFX, Graveyard Bandits) and Chris Del Rio (Ten Foot Pole, Implants, CrimeWave, Skrewtape, Dead Lazlo’s Place).
With a new bass player in Jazz Limbo (Fare Game, Bitchfits) on board BAD ADVICE recorded their debut album ‘How to Have Fun’ in Los Angeles. The album was released in February by Indelirium Records. A relentless worldwide touring schedule is due to follow in 2019 bringing the band back to Europe.
Keep your eyes and ears open for BAD ADVICE… PROST!!!

Song Lyrics: “Forever and a Day”

the sun goes down, another day is passing by
she sits in front of her tv just to kill some time
she thinks about the days when all her friends were all around
but now everyone’s gone and she’s alone in this boring town, and she says
i always wanted to go away
but a part of me just made me stay
i sat and watched the years go by
now i’m still here and i wonder why
how did i become such a jerk, tell me how
how did i become what i become, what i am now
i used to think someone would come, someone to make my dreams come true
guess i`m waiting forever and a day so i feel blue, but i`m used to it
the sun is down, another day is gone for good
she cleans her teeth and goes to bed like a good girl should
but every night she thinks about the life that could have been
she says look at me now, i`m full of regrets and broken dreams and she cries
well i guess there is no happy end until you change your view
cause if you don`t reach out for your dreams nobody else will do,
so do it for you, but she says
***
Please support us on Patreon!
https://www.patreon.com/blanktv
Like us on Facebook:
http://www.facebook.com/BlankTV
Follow us on Twitter:
http://www.twitter.com/#!/blanktv
Upvote us on Reddit:
http://www.reddit.com/r/BlankTV
Check out the new merch!
http://www.blanktv.bigcartel.com/
Thumbs Up, Comment and Subscribe!!